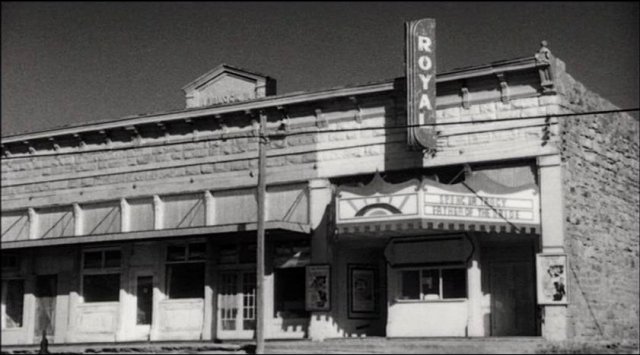 Set in rural Texas in 1951, Peter Bogdanovich’s The Last Picture Show (1971) is informed and sometimes seemingly suffused with the entertainment of the period. That’s most noticeable on the soundtrack. Pop music provides a near-continual backdrop, including such songs (according to the American Film Institute website) as

The list conjures up on a pre-rock-and-roll world and time all by its lonesome. Bogdanovich frequently uses the music as ironic counterpoint to the characters’ world. In one early scene, the town icy beauty, Jacy Farrow (Cybill Shephard), applies cold cream to her face while Tony Bennett’s Hank Williams cover “Cold, Cold Heart” plays on the radio.

And in Jacy’s house the television set is constantly going; on it we see scenes from Your Show of Shows and Strike It Rich. As her parents are wealthy and miserable, the latter game show counts for more ironic commentary.

But the movies are key. Although The Last Picture Show was adapted from Larry McMurtry’s novel, both the title and theme were perfect for Bogdanovich, a movie critic before he started directing and, then and now, a champion of classic American film. Both plot developments and the era see to it that the “picture show”–in better times the center of town life–must close. As the cashier/popcorn vendor/manager tells high school friends Duane (Jeff Bridges) and Sonny (Timothy Bottoms), “Nobody wants to come to the shows no more. Baseball in the summer, television all the time.”

The Last Picture Show is anchored by two movie-in-movie scenes in which the idealized material on the screen contrasts ironically (again) with the grim reality the characters are living. In McMurtry’s novel, the characters go to the movies to see the 1951 Ronald Reagan-Doris Day melodrama Storm Warning, described this way by IMDB:

Marsha Mitchell, a traveling dress model, stops in a southern town to see her sister who has married a Ku Klux Klansman. Marsha sees the KKK commit a murder and helps District Attorney Burt Rainey in bringing the criminals to justice.

Bogdanovich switches it, big time. Early on Sonny meets his steady girlfriend, Charlene (Sharon Taggert) at the picture show to watch a scene in the affectionate comedy Father of the Bride (1950) in which the Spencer Tracy character greets his daughter, Elizabeth Taylor.

Tracy: What’s happened to you? You look different.

Tracy: Yeah. You look all lit-up inside. You’re not wearing your usual deadpan look, your how-did-I-get-in-this-family? look.

Sonny and Charlene move to the back row for a make-out session. All the while Sonny keeps his eyes on the illuminated visage of the girl of his and so many young men’s dreams, Elizabeth Taylor.

At the end of the novel, McMurtry’s characters watch an Audie Murphy western, The Kid from Texas. Bogdanovich swaps this one Howard Hawks’s Red River (1948), with John Wayne and Montgomery Clift. One possible reason for the switch is that the Hawks film is in black and white, as is The Last Picture Show–a daring move for a studio film in 1971. Another is that Red River is one of the greatest westerns of all time, maybe the greatest. And the scene that unfolds before Sonny and Duane and the other one or two patrons  is one of the most thrilling examples of anticipation and release–and use of close-up montage–in the history of movies, the start of the cattle drive. As Duane says to Sonny as they walk out, “That was a good movie.”

One final touch. Outside the picture show lobby in the Father of the Bride scene is a poster advertising a coming attraction, another western, John Ford’s Wagon Master.  It happens to have been the first starring role of one of Ford’s company of “players,” Ben Jonson. It’s the same Ben Jonson who plays the moral center of The Last Picture Show, Sam “the Lion,” stealing the picture and winning an Oscar for Best Supporting Actor.